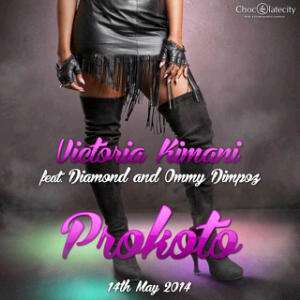 New joint from Victoria Kimani featuring Diamond and Ommy Dimpoz, two major acts in Tanzania in a Smash dance-hit reminiscent other subsequent hits on this new upbeat and catchy collaboration.

‘Prokoto’ follows up from her two previous successful hits ‘Whoa’ and ‘M’Toto’, and is a heavy conga drum led single, which sees Victoria Kimani, Diamond and Ommy Dimpoz infuse their native Swahili language with English.

It would also interest you to know that the word ‘Prokoto’ is borrowed from Congolese slang meaning Swagger. Victoria Kimani’s ‘Prokoto’ resembles that of a traditional African sound, and captivates the listener from the opening beat;there will lots of dancing and, gyrating.