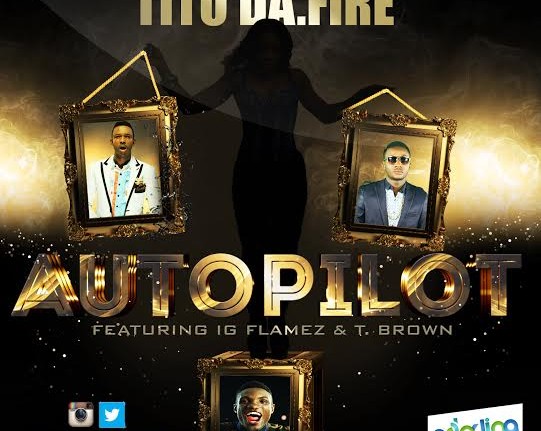 Tito Da.Fire is one Singer/OAP and Grinding Record Label CEO who continues to expand his signature sound by moving into AUTO PILOT, the ethereal, world of triangles of emotions that run deep. He sure knows his onions, having won several media awards over a long-spanning career, and having contributed to launching several music and broadcasting careers, such as MI (Tito Da.Fire was the first OAP who started playing MI’s first major breakout single on Radio in Lagos, Djinee’s Ego was first played by the OAP and several others.The new collaborative record AUTO PILOT is Tito Da.Fire’s first release in two years, produced by AIZBAG, and brings American Producer/Engineer/Rapper Cleron McCoy (credits include WALE,COMMON,Bone-Thugs-n-Harmony) to the mixing and mastering boards, and features Grinding Records new acts IG FLAMEZ and T.Brown, is a record that is set to transcend time and geographical music boundaries in the world music category.AUTO PILOT is a rhythmic and percussive dance banger sure to blast through your car speakers through to the dancefloors in one swoop. It is about a girl who controls her man in an unusually weird manner (Universal Mind-Control) while the man is willing to go all the way oblivious of her sources of powers of control. Each verse is crafted to convey the deepest emotions and the vocal delivery did seal the track from the first note through to the last. AUTO PILOT might be Tito Da.Fire’s most-expressive record till date.The vocal Singer/presenter has had his fair share of controversies, from rumored relationships with some celebrities, to his recent tweets which raised brows as regards the status of his marriage to a fellow OAP with whom he is reportedly experiencing a tough ride with rumours fueled by tweets from both parties which reflect some tipsy turvy in their relationship. The popular brand ambassador of Chelsea London Dry Gin Tweeted a series of #OnAReal tweets and one tweet that got tongues wagging was “it aint a crime paying a dj or OAP to play your song.” This drew attention of industry watchers as there has been a long debate as to whether artistes should pay Djs and OAPs for airplay, though in practice that’s usually a norm in showbiz. This tweet was immediately picked up and reactions began to pour in.Welcome on board a flight into the new drive, AUTO PILOT,  a deeper and compelling Flame for the dancefloor, as served by Tito Da.Fire.