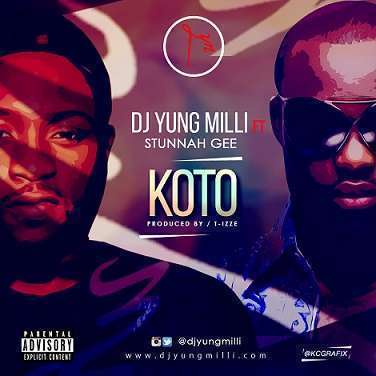 Veteran Nigerian and Afrobeats DJ, DJ Yung Milli has been at the top of his game as one of the UK’s best Afrobeats DJs for seven solid years, which has seen him DJing for some of the biggest artists such as J.Cole, Wizkid, Sean Paul and Davido, among others, plus DJing at some of the biggest and renowned venues across the UK including Merah London, Aura Mayfair and Café de Paris, just to mention a few. Having just joined leading London station Bang Radio 103.6 FM to helm its flagship Afrobeats weekly show, alongside Factory 78 and Vox Africa’s Adesope and MC Timmy, DJ Yung Milli is proud to unveil his brand new debut solo single titled ‘Koto’ featuring fast-rising Afropop artist Stunnah Gee, who is coming on the back of the release of his own debut EP ‘My Passport’ featuring Davido, Lola Rae, and Maleek Berry among others. Dedicating his new single ‘Koto’ to his loyal fans and supporter, the record is an exciting and infectious party jam, that Yung Milli and Stunnah Gee have crafted, with production from T-izze, especially to conquer club sets and dance floors up and down the country, and just in time for the summer too. Without any doubt, ‘Koto’ is certainly a breath of fresh air for Nigerian and Afrobeats music this year, download it below.